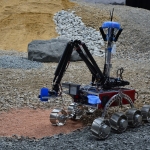 Project SEAR (Small Exploration Assistant Rover) is about the development of an autonomous planetary rover with the same name, which could be used in an extraterrestrial mission scenario. The project was initiated in April 2013 when the German Aerospace Center (DLR) announced the “SpaceBot Cup 2013”. In this robotic competition, participants were to fulfill a wide range of tasks on a Mars-like surface. An unknown region, which was characterized by many obstacles, was to be explored and mapped. Two object were to be found and transported to another, third object. The main challenges hereby lay in the requirements to fulfill all tasks autonomously without radio controlled interference (except for checkpoints) and that all communication was altered to be typical for this kind of scenario. This resulted in a delayed communication line with reoccurring blackouts when no communication was possible.